I love a challenge, as do my friends. For several years we trained for events based off the motto “How Bad Can It Be?”. Sometimes it could be pretty bad, occasioning the second motto – “It Seemed Like A Good Idea At The Time”, but the experiences and memories all have that nostalgic glow of a good time shared with good friends.

Some challenges were sillier than others: I hiked the Grouse Grind wearing a Minnie Mouse outfit, although not in the high heels original proposed (those were for the photos at the top). 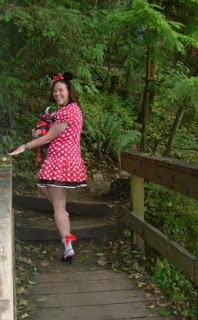 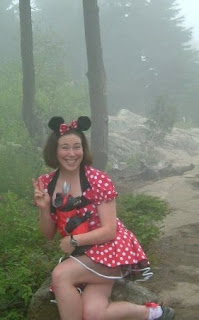 Other times it has been signing up for a marathon because friends were joking around:

But for the most part I seek out challenges because I like to test myself and the feeling of achieving goals or breaking personal records is awesome:

"Meanwhile, in the Sport Athena category, Vancouver’s Kirsten (50:55) was over three minutes clear in claiming victory [at Buntzen Lake], and completed a clean sweep (of four wins in 2010) to earn overall series glory, ahead of Shayla Richards (Maple Ridge), who was third at Buntzen (58:57)." Source

I have always felt mixed emotions about bootcamps because while I think they can be a useful tool to jumpstart a stalled fitness regime, they are also far too heavily marketed towards people whose base fitness levels are not sufficient to prevent injuries. I'm sure that many, hopefully most, instructors will offer modified positions for all exercises but I've found that someone has to ask first. For those new to bootcamps, perhaps intimidated not only by the workout but also by appearing "too weak", they might not think to ask for modifications or be too embarrassed. Down that road lies many an injury that can stall or halt an individual's journey.

I have attended two bootcamps run by different organizations. The first I attended was Booty Camp Fitness, a women's only bootcamp. Coworker!A, her sister-in-law and I all joined up for one of the soggiest spring outdoor sessions. I went into it knowing that there would be exercises that I would find challenging and so had no problem being the one to raise my hand and ask for the modified version. Quality over quantity -- that was the general idea anyway. Still, I pushed myself hard and didn't always have the best form. I remember one rainy day doing a set of pushups and watching the river of rain water crest over my yoga mat to run under my nose and between my legs. My arms were shaking, safe to say that muscle fatigue had set in!, and all I could think was that if I didn't finish pushing I'd wind up swimming! The following day I went to work as usual thinking I'd come through pretty well as my 20 minute walk from apartment to office didn't take me any longer than usual. That illusion disappeared the first time I had to use the stapler -- my arms were so sore that I could not clench my hand hard enough around the stapler and paper to make it function. I had to stand up and push down from my shoulder to get it done! (After doing that a few times, I just took my papers to coworker!A's automatic stapler.) Did I see drastic results from my attendance to that bootcamp? Not particularly. But it was a nice change from my existing fitness routine and it kept me doing something.

The second bootcamp I didn't wind up finishing. I purchased a Groupon for the bootcamp held by West Coast Fitness because even though it was held at o'dark thirty (aka 6am), it was also only 3 blocks from my apartment. Doable. I really liked the instructor and I found the exercises reasonable challenging with enough modifications. The only downside was that it was held in a squash court so the size was restrictive. The class was a choose-you-own-adventure setting with regards to hand weights. Although I have purchased various stretching aids over the years, which I'm sure the dust bunnies appreciate, I did not have any free weights. So prior to the first class, I went to the Canadian Tire by transit and picked up two 5lb hand weights. I know, I'm an animal. En route home, I called Amazing!L to complain about how I thought my shoulder was going to fall off from carrying 10lbs in my bag. Yes, there was definitely whining to which she, appropriately, wondered how I'd get through the class with these oh so heavy weights?? The answer to that of course, was that I didn't. Yep, I got those weights home, I brought them to the first class and then left them in a corner until Amazing!L got home that summer. I didn't finish the bootcamp because mid-month I moved to a friend's house to catsit and it was just too damn early and too damn far (i.e. ten more blocks away). Look, I'm not a morning person alright?!

Of course, I always hear about what a good idea it is to workout first thing in morning: it gives you lots of energy for your day, you get it done and don't have to worry about it later, it doesn't interfere with your social life...blah blah blah.... I cannot drag my ass out of bed. That does not stop me from buying fitness dvd's with the grand plans of how I will reform my behaviours -- and I'll start using those stretching props too! I've worked with personal trainers before and I know that I respond best to the ones that push me to try harder, try the higher weight and the extra set. That's why I figured that $5 for Jillian Michael's 30 Day Shred was worth a shot. The ethics of "The Biggest Loser" aside, Jillian's coaching style is right up my alley. I purchased that dvd last year and to date I have done the workout twice -- and one of those times was this week when my soccer practice was cancelled.

First impressions? Well, two days later -- ouch. Yesterday my quads were a bit sore but today is the cornucopia of muscle groaning. Walking I can feel the shortness of my muscles as they remain gathered in tight little knots. Sitting down in my office chair or the washroom reminds me of the squats that seemed so easy 2 days ago. So to sum up -- ouch. However, as I spent most of 2012 recovering from a prolonged foot injury I am interested in regaining some of that lost fitness. I've set some goals for myself: run 15km/week and create soccer drill time if my practices fall through. In March, I'll be adding the 30 Day Shred dvd to that regime. I'll post here my thoughts and experiences during the month. I shall endeavour to be entertaining. Tomorrow I'll post my initial thoughts about the program, the assets and drawbacks as well as if I can go to the washroom without resorting to using the handicap stall with that handy railing. (You're welcome for the parting image.)
Posted by Kirsten at 2:58 PM

Kirsten
I blow my nose like a brass quartet; I make many cheesey jokes; I really like lists.

What I'm Reading on the Interwebs