So in December I took over 700 photos but I have to say that I love these two: 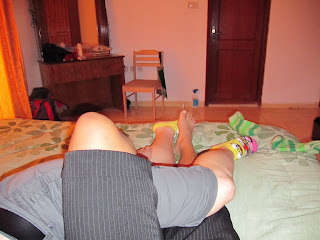 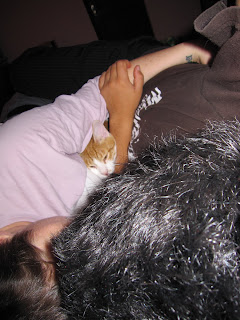 ...and Flash has just wedged himself in between as if to say, thanks for leaving me some room guys.
Posted by Kirsten at 7:42 PM No comments:

As I strolled along the Serpentine I could see the lights from many rides and buildings, they rose and dropped in the sky and reflected off the waters. It was a lovely sight and I skipped a bit up the path as the sounds of many people filtered towards me. There were many Christmas themed rides as well as a haunted house and a bizarre roller coaster. When I found out about the Winter Wonderland the thing that really caught my eye was the marketplace as I hoped to find some presents for my family there. The entire setup proved to be quite large and so to keep up my spirits I got some spiked mulled wine and continued my meandering. I found quite a few interesting items but sadly it was an issue of space as I had only my carry-on bags.

I picked up something fun for my brother but as always, I’m not sure if my idea of his eclectic tastes and his actual eclectic tastes will match up. I’ll just have to hope for the best. I did find something that I know my mom will like and picked up a hand-painted ornament as a memento of my trip. All too soon I had to head back to Paddington station and Heathrow airport. I didn’t see any bears there but I did see something scarier – nestled in amongst the Marks and Spencer and Paddington bears…was a Krispy Kreme store.

I am dumbfounded that such crap is being foisted upon innocent nations; bad enough that they are in the US! I of course know that McDonald’s is a global presence but it was something else to see not just McDonald’s but Burger King, Pizza Hut, Kentucky Fried Chicken and of course the other global giant, Starbuck’s while in Kuwait. I was surprised to see Chili’s and T.G.I. Friday’s as well even though I knew the equivalent chain of Hard Rock Café was global. When I first graduated from high school I remember that the popularity of going to Hard Rock Café was just ebbing although I still went to a few locations. (For accuracy, there was a Hard Rock Café in Kuwait as well.)

I returned to Heathrow Terminal 5 again with three hours to spare and again breezed through check in and security. With a surfeit of time on my hands I found a spacious bathroom stall and changed out of my now travel worn clothing. It felt quite good to be in fresh clothing, to wash my face and try to order my unruly hair which had spent the better part of thirteen hours under a cap. Sadly, it took a third time of travelling and losing my cds to make me realize that I really should not do so. Some lucky person got my entire collection of Christmas music save the cd that was in my discman.

I know, why have I not gotten with the times and purchased an mp3 player which, in addition to being compact, can hold many such albums? I can only say that for a long time I had no home computer and as such no place to store all my music files. Since then I have had a computer, obviously with internet connections, but I have not been able to access my external hard drive with all of my music. All of this leads back to me leaving a stack of Christmas cds in the ladies washroom of Terminal 5. May the finder enjoy them in the spirit of Christmas.

After changing I went to Wagamama and enjoyed some ramen and the Battlestar Galactica graphic novel my coworker!E got for me. I had a nice table that allowed me to overlook a large portion of the terminal and the runway. I really do love to fly – it is such an amazing technological feat. After dinner I made my way to one of the trains to another section of the terminal and then walked to the farthest corner. I tried to espy how we would be boarding but I couldn’t find the usual walkway beyond the final check in counters. When my flight was announced I felt a thrill and flutter of anticipation course through me. In six short hours I would be in Kuwait; in six short hours the distance between amazing!L and myself would be measured in feet instead of miles. (Ah, the twitterpation at the thought of no distance at all!)

Steady hands packed away my book, feet smoothly took me to the final check point and lips curved to match the smile in my passport. As I went down the stairs and a lower walkway to board the plane my smile grew. I was greeted and directed to my seat from which I would have my first glimpses of Kuwait.
Posted by Kirsten at 4:59 PM No comments:

I always enjoy travelling, especially when I get to fly a lot. The anticipation I experienced for my holiday travels this year however, exceeded all of my other recent trips. Days away from my departure I began to count down the time remaining in Vancouver in hours – the immediacy of my impending travels was thrilling. Once I arrived at the airport I had no difficulties but my Friday up to 4:30pm was set to a frenetic pace of trying to get too much done in a too small amount of time. Thankfully my flight was delayed by snow in London and I had to hand the amazing resources of awesome!A who gave me her time and transportation to the airport.

I arrived at Vancouver International for the suggested three hours prior to departure and breezed through check-in and security. I haven’t flown internationally through Vancouver before – flying to the US, while technically international, still only merits an intermediary wing between domestic and international flights. The airport was fairly empty and I found my way to a sit-down meal as I had plenty of time to fill. My colleagues would be arriving at our office Christmas party soon and although I have always enjoyed myself, I could not find it in myself to regret that I would be missing the event this year.

I phoned my mom to chat since I would not be home for Christmas and then wished awesome!S happy holidays. Soon enough I was boarding the plane that would take me to London and thence to Kuwait City. I did not have a window seat on the first leg of my journey but as we would be flying over a lot of ocean I didn’t mind too much. I did miss seeing the sunrise though which I find to be truly amazing when you are flying so high in the air. I slept easily through most of the flight to London and once I navigated through the large Terminal 5 I found my way to the trains.

I have utterly terrible direction when I use trains. It is a sad fact that I can get lost on the Skytrain and you only have a choice of two directions in our city. I was justifiably nervous of using the epic London Underground for this reason and so chose to take the Heathrow Express. With a direct route to Paddington station and a transit time of 24 minutes – this was the train for me. I get on at the airport; I get off at Paddington station. I get on at Paddington station; I get off at the airport. Once I had a coffee in hand, got over the shock of seeing a Krispy Kreme in London and found a map I skirted Kensington Gardens to Hyde Park.

Although I knew I had a long layover in London it was not my original intention to leave the airport as I did not want to risk missing my flight to Kuwait. After speaking with my coworker however, I looked into transportation and events just to feel out the waters. Eight hours is a long time in an airport terminal. Thus it was I discovered the Winter Wonderland held along the Serpentine in Hyde Park. A fan of Sherlock Holmes as I am, I was entertained by the thought of strolling the same park paths as the great detective. I’m also a big sucker for anything Christmas related – and it had a German village! (In England. Ha.)

En route to the park I crossed paths with a horde of rollerblading Santas – a fundraiser for a local club that hosts free meetups for rollerblading in a similar fashion that the Running Room hosts the free run club. I had to give them kudos for navigating the rough park paths and cobblestone streets. I can’t manage roller blades on a smooth surface! I chatted with a few Santas that were taking it easy on the rougher portions and just appreciated being some place different. It had gotten dark quite early – it was only 4pm and I had anticipated having some sunlight during my jaunt out. As a result I did not visit the Norwegian world war memorial that is located in Hyde Park.
Posted by Kirsten at 2:37 PM No comments:

Kirsten
I blow my nose like a brass quartet; I make many cheesey jokes; I really like lists.

What I'm Reading on the Interwebs